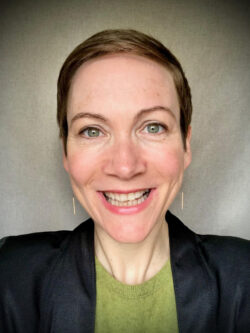 This article, by Krista Lamb, was originally released as part of the 100 Lives of Insulin project by the Insulin to Innovation Consortium. Visit their site to read more inspiring profiles of people who have been affected directly and indirectly by the discovery of insulin, and to learn about upcoming events. This article is reprinted with permission.

Dr. Holly Witteman was seven years old when she was diagnosed with type 1 diabetes. She spent a month in the hospital learning to manage the condition; all of the hundreds of small tasks she and her family now needed to perform to keep her healthy and alive.

While her research does not focus solely on diabetes, her diagnosis has played an important role in her career and in her advocacy work.

A professor in the Department of Family and Emergency Medicine at the University of Laval in Quebec City, Witteman focuses on human factors engineering. She considers how information is presented to people and how to design systems that will work as intended for those who need them. “We look at what would help people naturally learn things and understand things and make them fluent,” she explains.

As a person living with diabetes, Witteman has consistently been an advocate for research that is developed and led by those living with the condition being studied. This patient-oriented research has allowed for those with firsthand knowledge of a chronic health issue to be part of the research process from the very beginning.

Her work in this area, much of it with the Diabetes Action Canada research network, has helped inspire others living with diabetes to become part of the research process. Witteman sees this as critical. “The reason I got involved with Diabetes Action Canada was because they needed someone who had expertise in how to involve people living with the condition in research about that condition, and I have always done that,” says Witteman. “That’s how you do things in human factors. If you develop tools for people without involving the people who are going to use them, then they’re not going to work.”

In her own life, she has been in the room when a researcher presented a new therapy or technology meant to improve the lives of those with diabetes. Often, extensive work had gone into developing this project, but it was immediately clear to Witteman that no one with diabetes had actually been involved in the process. She found this incredibly frustrating, as so much time and energy was being spent developing tools that were not appropriate for the end user – a problem that could have been solved by simply involving people with diabetes in the research process. “The lived experience of people with diabetes has historically not been well respected in research,” Witteman says.

While there have always been some researchers who included those with the condition in their work, it was a small number and even now she worries that if funders didn’t require patient involvement, many investigators would revert back to the way things were done previously. “I think it’s pretty fragile right now the way it’s set up,” she says. “It’s more work. I think it’s worth it. I think it’s very rewarding and allows for better research. But it takes more time. You have to build relationships.”

With Diabetes Action Canada, Witteman has been part of the development of a wealth of tools to help researchers better work with those living with diabetes, something she hopes will improve the process on both sides and make everyone feel more comfortable. She has also supported many patient partners who wanted to better understand how they could be involved in an effective way. If everyone understands the benefits, she believes the extra effort will be valued.

Witteman has shied away from working exclusively in diabetes, however, as she knows that living and working with a condition can be exhausting. “I spend all my life coping with it, and it already occupies a large proportion of my time and my attention,” she says. “I don’t know if it’s the same for other people, but certainly for me it is more emotional when working on a topic that intersects with my life. Working on something that has to be respected because this is my life and it affects me in a very day-to-day, impactful way. I think it’s a testament to the people that are able to do it that they are able to shoulder that emotional work.”

For those living with diabetes who have benefitted from her research and advocacy, there is much gratitude that despite that emotional toil, Witteman has continued to play an active and passionate role in fighting for research to better represent them.