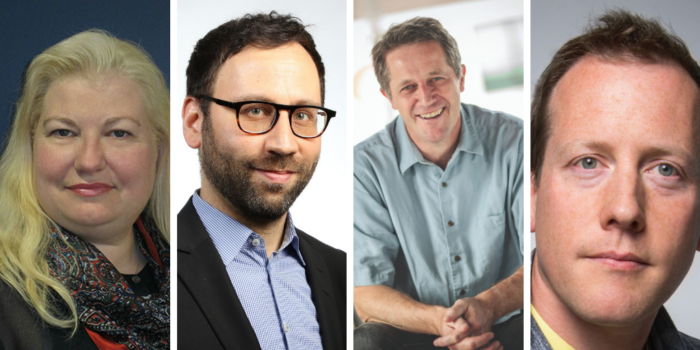 In late November, the Canadian Institutes for Health Research (CIHR) announced new funding for its Team Grant: Diabetes Mechanisms and Translational Solutions as part of the organization’s 100 Years of Insulin program. Alongside CIHR co-funders Diabetes Canada, JDRF Canada and Kidney Foundation of Canada, exciting new research programs were announced. Among them, were several with a clear focus on patient-oriented research and where the teams worked with Diabetes Action Canada Patient Partners on their grant applications.

The SUGARNSALT Team Grant looks at “Sodium glucose co-transport-2 inhibition diabetes and kidney function loss in type 1 diabetes”. The team is being led by Dr. David Cherney from UHN Research and includes co-investigators Dr. Bruce Perkins, Dr. David Campbell and Dr. Anita Layton – all of whom are Diabetes Action Canada researchers.
“Patient partners have been involved from the beginning to include trial components that are relevant to their experiences,” explains Cherney. “We have included components of the trial that are meaningful to them, including measures of kidney function, and also included an entire aim related to patient preferences and reported outcomes. We will also be meeting on a regular basis to make sure out methods and approaches remain patient focused.”

Led by Dr. Patrick MacDonald from the Alberta Diabetes Institute, a second funded project looks at “A deep phenotyping network for understanding human islet variation in health and diabetes”. For their application, the team brought together members of the Diabetes Action Canada Collective Patient Circle to ensure the work met the needs of those living with diabetes.

“We appreciate this funding from CIHR-INMD and JDRF, and the support we received from Diabetes Action Canada and their Collective Patient Circle for input and guidance as we developed this program,” says MacDonald. “Our project seeks to build a cellular and molecular atlas describing pancreatic islets in both health and disease, with a goal of making this resource available to answer many questions from the broader scientific and health communities. Interaction with Diabetes Action Canada, and engagement through a patient focus group, taught us much about the kinds of questions and the sources of data that are important and also about how we can better integrate patient feedback with our program going forward. We will continue to develop these important interactions to help bridge gaps between cellular work on islets and the needs of the community.”

Having received ongoing support from Diabetes Action Canada, Project OPEN, led by Dr. Valeria Rac from UHN Research, has a new infusion of funding for its project “Preventing vision loss from diabetic retinopathy: Guiding primary care diabetic retinopathy screening in Canada through the use of provincial healthcare administrative data.”

The only team to have a Patient Partner listed as a PI, the group has benefitted greatly from the inclusion of Debbie Sissmore, who lives with vision loss due to diabetic retinopathy, and her husband, Malcolm. During the application process, this team also had focus groups facilitated by Diabetes Action Canada. During this consultation, participants emphasized the need for a more systemic approach to the prevention of diabetic retinopathy.

“Our Team Grant application had a very holistic approach to engaging Patient Partners,” says Dr. Valeria Rac. “The insights gained from Debbie and Malcolm Sissmore and our focus group fully guided our application. In line with the Diabetes Action Canada approach, we wanted to make sure that patients’ perspectives and needs were at the forefront, and we will continue to do that throughout our diabetic retinopathy screening project.”

Led by Dr. Bruce Verchere at the University of British Columbia, the fourth funded team is looking at “Immunometabolism in diabetes: harnessing metabolic crosstalk between islets and immune cells for therapy”. They drew on the input from the Collective Patient Circle, and Diabetes Action Canada facilitated focus groups as they designed their application, and found the experience extremely valuable.

“One hundred years since the discovery of insulin by Canadian researchers, there is no cure. And just what is a “cure”? In a patient engagement session in partnership with Diabetes Action Canada, our team learned from T1D patients and caregivers what a cure meant to them,” says Verchere. “For most, they wanted to be free of the constant disease burden; one patient described, ‘to live a life that looks like anyone without diabetes; no devices, no insulin, no complications, no anxiety.’ Our team learned the urgency to move research forward and the importance of communication findings to all.”

Diabetes Action Canada is thrilled to see patient-oriented research at the core of so many of these funded projects and looks forward to working with each team as they move forward to ensure the needs of those living with diabetes are front and centre.

Knowledge Translation. What is it, why is it important and how do we achieve it?