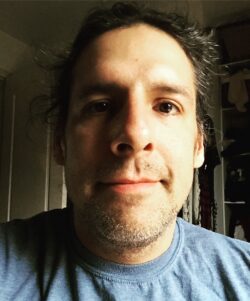 For Kamloops native Mike Alexander, a diagnosis of type 2 diabetes was a much-needed wake-up call. Alexander, an Indigenous artist and writer, had been struggling with addiction and an unhealthy lifestyle for many years when he got the news.

The diagnosis started Alexander on a journey to learn more about healthy living, changing his diet and exploring options for exercise that he might enjoy. After some consideration, he decided on the ‘go big or go home’ philosophy—beginning to train for a triathlon. “I deduced that I was good at self-destruction and I could apply myself wholeheartedly to that activity, and had done so for a long time. What happens if I decide to turn that energy into something positive?” he says. “I picked endurance sport because there’s an amount of pain involved with it that you learn to overcome through repetition. The mindset being that pain is something that is worth fighting through. I wanted to see what my midlife body could do. And not only is it physically amazing, but it’s had such a strong impact on my mental health as well. You keep on pushing to do the almost unbelievable and make it so that it becomes possible.”

A survivor of “the Sixties Scoop”, when many Indigenous children were removed from their homes to be raised in foster or residential care, Alexander was very aware that residual trauma and Colonialization had played a role in his health issues. Turning that energy towards something positive felt right, and a sport that allowed him to build towards a major goal was helpful.

“A full triathlon and Olympic distance triathlon, that seems like too much to comprehend. And life is kind of like that, as well. I can’t change everything overnight or over the course of a few months or years. This is a lifetime journey now. Diabetes is a lifetime journey. There’s things that I can do today.”

After his first triathlon in 2017, Alexander felt like he’d made the right decision to pursue the sport. “It’s a very rewarding experience to join the ranks of people that have dared to push themselves like that. And I found the people I spoke to have some pretty wild stories themselves. I think that people who are driven towards triathlon can come from some very colorful backgrounds, much like my own, and it’s so awesome to feel that brotherhood or sisterhood with other people who are just doing something phenomenal for themselves.”

Alexander has also become interested in diabetes research and advocacy in recent years. Speaking with friends at the National Indigenous Diabetes Association, he learned about opportunities to make a difference for the community. With his newfound coping mechanisms and the things he has accomplished, he wanted to share his story to encourage others who might be struggling.

“There’s two things really that I think about more than anything else. One being that I don’t see an awful lot of Indigenous triathletes and maybe I don’t need to. But what I do need is for Indigenous people to know that we can accomplish anything we set out to do, that there are no barriers in our heads that we can’t get over. There’s barriers in the world for sure, but if we turn inward to find that strength to do what seems like a good thing, then it can be done,” he says.

His second reason is to break down stereotypes that people may have about those of Indigenous background. “There are a lot of problems specifically with health care and delivery of services to Indigenous people that are based on stereotypes and racism. I want to show these folks that, “Hey, look at me, I’m not lazy, I’m not drunk. In fact, I’m doing something that you can’t even believe I’m doing. And I think that maybe that smashes the idea that we don’t have the same potential as anyone else or other folks.”

As a Diabetes Action Canada Patient Partner, Alexander is sharing his experiences as part of the Patient Circles, as well as speaking at events. He is hopeful that his voice can represent those at the table who have changed the trajectory of their diabetes diagnosis.