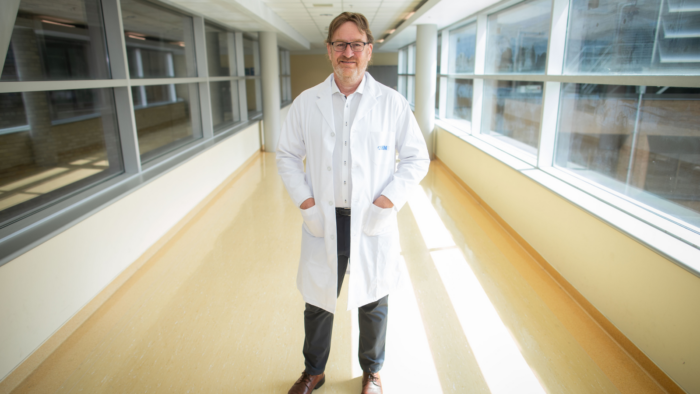 On June 6, Dr. Gary Lewis, Scientific Co-Lead for Diabetes Action Canada, and outgoing Director of the Banting & Best Diabetes Centre, received the 2022 Edwin Bierman Award from the American Diabetes Association (ADA). This award is presented to a researcher who has made outstanding scientific contributions to the understanding and treatment of diabetes and macrovascular complications. It was presented as part of the ADA Scientific Sessions in New Orleans, where Lewis was a speaker.

Lewis, a clinician-scientist at the University Health Network, has long been interested in how his work could support the overall health of people living with diabetes. Over the last two decades, his research has made a significant contribution to the understanding of intestinal lipoproteins. “I have, from the time of my training, been very interested in this whole issue of cardiovascular disease and people with type 2 diabetes and prediabetes and metabolic syndrome. It’s very complex as to why people with diabetes have such high rates of heart disease, and it’s multifactorial. But one reason is that they have abnormal blood fats, also called lipoproteins,” he says.

When he started his work in this area, the focus was on the liver, which was known to overproduce triglyceride-rich particles, raising their levels in the circulation. It was also known that triglyceride-rich lipoproteins, derived from the intestine, are increased after a meal. But the focus on intestinal particles was on their delayed clearance from the circulation rather than an increase in their production rate.  An associated abnormality when these particles are in excess, is that high-density lipoprotein (HDL), considered “good” cholesterol, is low. Yet, just raising the amount of HDL through medications or diet doesn’t result in a reduced risk for heart disease. These were puzzles they wanted to solve. Why does the liver overproduce fat particles, does the intestine also overproduce fat particles and why is HDL low in those with prediabetes, metabolic syndrome and type 2 diabetes?

As with many scientific discoveries, a potential answer came about during a project focused initially on the liver. Working with Syrian golden hamsters, Lewis’s collaborator, Dr. Khosrow Adeli at Toronto’s Hospital for Sick Children, decided to also culture cells from the animal’s intestine. They were surprised to see that these insulin-resistant hamster cells had a three to four-fold increase in triglyceride-rich chylomicrons (a form of lipoprotein). “It’s not just the liver, but the intestine seems to get insulin resistant, and overproduce these chylomicrons. And we didn’t really know that before. That was an “aha” moment,” says Lewis “We studied the effect of all the things that we had previously done on the liver [in the intestine] and we showed, to our surprise, that this fat production by the intestine is highly regulated, in many cases by the same factors that control liver fat particle production.”

Further research led them to look at the role the gut hormones GLP-1 and GLP-2 might play in this process, and how they may help in finding treatments. Prevailing theory at the time was that the amount of fat you ate was exclusively the driver of the fat particles produces by the intestine. While this is still true, Lewis’s team saw that there were other factors, like hormones, playing a role in regulating fat particle production by the intestine.

In uncovering this, and their many other important findings, Lewis is quick to point out that they did not know exactly what they were looking for or what they might find—hallmarks of basic or foundational science.

“This was a project full of surprises. The first surprise was that the intestine overproduces lipoprotein particles in insulin resistance and diabetes. The second surprise is that there’s a whole second order of regulation that goes beyond what you eat: hormones, neural networks, nutrients, etc. Surprise number three came from a gut hormone called GLP-2,” explains Lewis, whose research showed that the hormone was not stimulating new secretion of lipoproteins, but that it pushed out and mobilized chylomicrons already formed but residing temporarily in the intestines. “The forth big surprise is that pumping of the intestinal lymphatics, which are like a drainage system, are actively regulated by factors that also determine the rate of intestinal fat particle production.”

And the surprises continue, mobilizing Lewis to keep pushing to learn more. “It’s curiosity driven. One thing leads to another thing. We’re just curious. We don’t know. Are we going to have an impact? Maybe not. Is it going to lead to some new treatment or some new understanding? We don’t know. We just keep doing the experiments based on what we’re seeing and we keep pushing,” says Lewis, who is a passionate advocate for this type of foundational science. This is the work that must be done in order to better understand our physiology and find new and better ways to treat or even eradicate disease.

It is this passion that has fueled his work with the University of Toronto’s world-renowned Banting & Best Diabetes Centre, where he has spent eleven years as director. Throughout his tenure, which ends in June 2022, Lewis has pushed to ensure continued funding for this type of research. “You need to encourage and support people who want to do curiosity-based research. I’m not going to tell people what to study. If you want to study a particular receptor on a T cell, because it’s interesting to you, that’s what we need to support. Because we don’t know where it’s going. Basic fundamental science must be supported.”

The continuation of this work—supporting clinically-relevant, patient-oriented research—is what he does with Diabetes Action Canada. The organization is currently working on several projects where people with lived experience are involved in research development and dissemination, a new and innovative way to bring greater understanding of the important work being done in labs.